You have bonus money in your account, wagering will be required before any winnings can be withdrawn.
You are now playing with real money.

We use cookies in order to provide you with a better browsing experience. If you continue to use this website we assume you are ok with this. To learn more and to turn off cookies visit our Privacy and Cookie Policy
The game is not available
Enjoy playing hundreds of new games
Got it
You exit
Dismiss
Relaunch
Loading
Deposit
Are you sure?
EXIT GAME
×
Deposit
Login
You are currently playing with an available Bonus Balance. This is in line with the Bonus Policy you accepted, please revert to our Bonus Policy for more information.

Explore all the new online casino games, that we have launched during May and June 2019

Want to learn more about slot machines and which games offer extra spins? – Read more on our Ultimate guide to Online Slots. Did you also know that you can find the actual RTP (Return to player), on all casino games by pressing the ”info” button in the actual casino game?

We want to remember all our players that Gambling can be addictive. We accept only players above 18 years old. Please Play Responsibly.

ISB-Ainsworth presents their brand-new slot machine game – Enchanted Eyes. This title is completely optimized to work on all your devices. With five reels and three rows, stunning graphics and an RTP of 94.31% this game makes sure that all players are entertained.

Spin six or more scatters to trigger the Big Hit Feature. This feature entails three re-spins and a random multiplier that is multiplied with your win. Randomly the Extra Big Hit Feature can be triggered where the big Scatter counts as nine Scatters towards the Grand Prize. The Grand Prize is a mystery feature that can be awarded randomly on any paid game.

Book of the Irish

Nyx-Inspired introduces its newest video slot game to the Dealers Casino lobby. This game is built up by five-reels and three-rows. There are 10 paylines and the slot game has a Return to Player percentage of 96.21%. The minimum bet is €0.1 while the maximum bet is €100.

The games Bonus symbol also works as the Wild, which in the Free Game feature turns a symbol to an expanding scatter symbol. There is also a gamble feature where the win in the base game can be upgraded to Free Spins.

Book of the Irish awaits you in the Dealers casino lobby now. 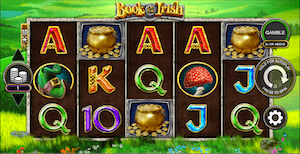 Another great game from Nyx-Inspired is now available on Dealers Casino. This video slot game uses the traditional fruits and the lucky number seven as inspiration for its theme. The game is built up by five-reels and four-rows. The game has an RTP of 95%, and a minimum bet of €0.2 while the maximum is €100.

The game has two special features to set it apart from other slot machine games with the same theme. The first is a Gamble feature, which is triggered during any win. The player is then given the chance to double their winnings by gambling or to collect their winnings. Players can gamble one win up to four times. The second feature is called the Spin Chance. This feature is triggered automatically when the credit is below the current price of play yet still greater than zero.

Play Super Fire 7’s now, it is available in our lobby! 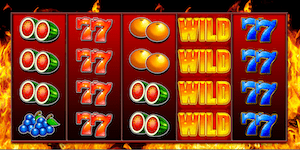 What does the fox say? In this new NextGen Gaming slot machine game the fox might not say much but it will definitely be by your side as you try to spin and win. The video slot is built with dual reels (three rows/five reels) and has an RTP of 96.75%. The minimum bet is €0.25, and the maximum bet is €25. There are 50 ways to win.

Find out what the Fox will say to you – visit our lobby to play Foxin Twins now. 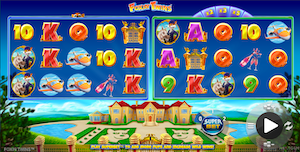 Ever been interested in the ancient Egyptians and their temples? Then this game might be the perfect game for you as it invites you in to the Horus’ temple in search of hidden treasures. This three-row, five-reel video slot machine from 1×2 Network has a Return to Player percentage of 95.93% and is of low volatility.

The bravest explorers will find the scatter symbol, and when three are found incredible bounties provided by the God Horus will follow. Also keep an eye out for the lucky scarabs, they will multiply your winnings.

Explore the Treasure of Horus by visiting our lobby today. 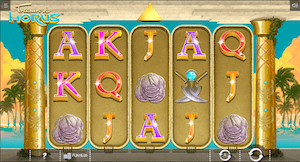 This new video slot game from NetEnt features four super heroes (Psyop, Zero.X, Flare and Chrono), together you can defeat the super villain “Deep Pockets”. This game has an RTP of 96.81% and is built up by 5 reels and 3 rows. Each of the four Heroes in the video slot game has their own feature, spin all of the features and a fifth extra feature will get locked up.

The four heroes have super powers that will help you defeat the evil “Deep Pocket”. These features are: “Psyop’s Stacked Wilds”, “Zero.x’s Overlay Wilds”, “Flare’s Multiplier” and “Chrono’s Re-spin”. When Psyop’s feature is triggered the wilds will stack on 2-3 reels. When you spin Zero.x he will trigger 3 to 5 random wilds to appear and overlay where other symbols are. Spin the super heroine Flare to trigger the Multiplier, you can multiply your wins by x3, x4 or x5. The last super hero feature is the Chrono’s Re-spin, he only appears randomly after a no-win spin to trigger a re-spin of all five reels. The spinning continues until a bet line win occurs. 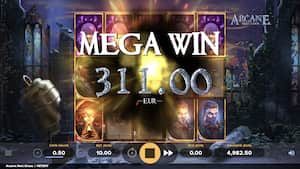 This new slot machine from Play N’ Go with an RTP of 94.5% is not a game with a lot of features or extra animations, it is a game that relies on the good classical things that made slot machines so popular, the possibilities of winning with the choice of not betting too big amounts at once. The minimum bet of this game is €0.05 while the maximum is €100, in other words, no matter the size of your pocket, you will always be able to play Inferno Star.

The game is built up by five-reels and three-rows. That the game is simple and classic does not mean that it does not have flair. Spin the Raging Sun Scatter symbol on reel 3 and activate the Re-Spin mode. This re-spin mode continues until no more Sun symbols appear or until all the reels get one Sun!

Stare into the sun – Play Inferno Star in our lobby now! 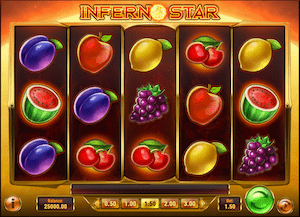 This new slot machine game from NYX-Scientific Games has a lot of interesting features that makes it a very entertaining video slot game to play. The RTP percentage of this slot machine is 96.01%. Furthermore, a great part of this game is its graphics and animations.

The base game has five reels and four rows, on top of those are the special Wheel feature. If the special background lines up in the base game, the Wheel feature will be triggered. The wheels contain special in-game awards like Jackpots, Wilds and Extra Spins. Besides from these features, the game also includes a Wild Spin Bonus and an Extra Spin Bonus, in other words, it is packed with entertainment. 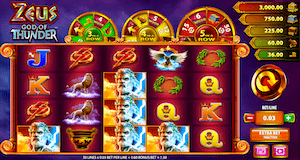 NYX-Blueprint Gaming introduces its latest video slot inspired by the American West. This high volatility slot machine game has an RTP of 96.21% as well as extra features. The minimum bet lays at €0.1 while the maximum bet is €1000.

The first special feature of this video slot game is the Golden Streak, which is triggered when three or more bonus symbols are spun. You can also choose to gamble your spins in order to win extra streaks. Additionally, you can choose to activate the Legend Extra Spin Bonus Bet feature where you are guaranteed the possibility of up to three spins.